Now, generally, analytical methods are used to evaluate stability of the slide-prone slopes. These methods take into account correlation of retaining and shifting forces along certain surfaces.

Such an approach is based on solving of static mathematic problems, which do not consider dynamics of the strained conditions of the rock mass.

In this case there is a big possibility to get inaccurate result due to the fact applied dependencies do not reflect a complicated picture of strains distribution in the zones of deformation development.

The main point of the proposed approach lies in the fact that dynamics of the stained condition of rocks composing the slide-prone slopes may be evaluated by the result of measurements of the pulsed electromagnetic emission in bore holes.

While evaluating the stability of the landslide of technogenic origin near Simferopol (Crimea) the method of the natural electromagnetic emission (EME) recording was used. With the help of the special field spectrum analyzer the set of EME parameters was recorded that is number of pulses, number of pulses’ packages and the power of emission spectrum.

This slide formed in Cretaceous clays overlaid by lime stone beds under the influence of technogenic cut shaped as a foundation pit, which later was filled with water. (Fig.1).

Fig. 1 Geological engineering section of a sliding slope at the sector of the maximum strains.

The main objective of the geological-engineering measures at the slide was the following: to evaluate the current conditions of the slope and to determine depth where strains destabilizing slopes originate.

To solve this task at the first stage boreholes with coring were drilled. On core samples with intact structure physic-mechanical features of the rock were determined. Based on the obtained results of rock durability and the results of core studies rated diagram-sections of supposed shifting surfaces were made, as well as stability factors by Shahuniants method (1973) were precalculated.

Obtained factors with respect to different variants of rock stability appeared to be positive ones (1.2-1.5) which do not reflect actual strained condition of the massif, within which mass deformation of residential buildings were observed. Following from the results the hypothesis arose that there are latent deformations in the massif displaying as surface and deep creep at different depths.

To confirm this hypothesis monitoring of EME was performed during half a year taking measurements from the surface and from holes situated along the profile line.

The functional dependency between mechanical strains and intensity of EME was found according to the results of earlier field reological tests of clay rock with simultaneous registration of mechanic-electrical phenomena in them. (Fig. 2) 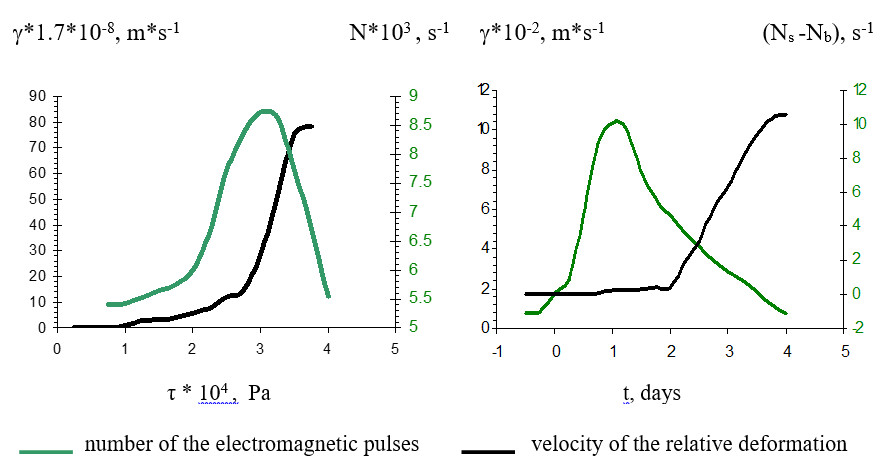 By the results of variant measurements of the natural pulsed electromagnetic field of the earth (NPEMFE) from the surface schematic map was made showing distribution of EME intensity, reflecting the strained condition peculiarities of the slide prone slope. (Fig. 3)

By doing this, hotbed (central) structure of strain concentrations was revealed which is accounted for the character of deformation development of the deep creep.

The results of the hole sounding by EME spectrum analyzer present unique possibility to visualize physics of the process and to determine both general thickness of deformation zone and the depth of the most active shifting surfaces in the sliding massif. For example, in the hole # 118 which in the lower part of the sliding slope where as a rule, tangential strains concentrate, 10 gliding planes were found in the interval of 13-27 m, which was taken from the core sample with continuing breaks. The graphs of EME parameters distribution in this hole allow by the anomalous manifestations to find a number of the most active shifting surfaces at the depth: 13, 17, 22, 24 m and on the background of the whole strained zone from 16 to 28 m (fig. 4).

Similar results were received from other holes which are situated on the line from the head failure to the basis of discharge, which give the possibility to outline hotbed (center) of rock creep in the slide-prone massif and use these data in the project of antislide constructions while determining depth of piles.

Besides in general by the results of EME measurements in holes during monitoring the following conclusions were made showing the peculiarities of the slide strain development mechanism:

1. At the current stage of the development the sliding process is characterized by the presence of a number of the local centers of strain concentrations revealed by the results of EME measurements both from surfaces and holes.

Fig. 3 Diagram of the strained condition of the sliding slope from EME mechanism on the surface

Fig.4 Parameters of electromagnetic emission; distribution in the hole 118

2. According to the character of EME parameters’ distribution during the period of investigation it was found that on different stages of the process the type of deformational behavior of rock changes – shifts take place both along certain contact surfaces and in the form of developing zones of deep and surface creep.

3. The analysis of distribution of correlation for the main EME parameters: number of packages and pulses, recorded in holes allow evaluating on the qualitative level the stage of deformational development of rock. If the intensive emission is recorded mainly as pulse packages, then it proves overlimit strain condition corresponding to predistruction stage and when emission displays in great number of single pulses, then this indicates the beginning of the deformation stage corresponding to preliminary stage of rock strain.

4. According to EME parameters change in holes it is possible to evaluate the type of deformational behavior of rock (surface, deep creep; volumetric or plane shift) that gives the possibility effectively choose reological models for description of slide deformation features.